2019 begins with some sporadic running trouble with Blue Bess which was initially, and erroneously, attributed to air leaks at the inlet manifold gaskets. Consequently, these were replaced anew with home-made items, as shown below.

This seems to get the car back in working order and Deep Blue is therefore put away for some work which will have to concentrate on the rear lights and the rear windscreen heater. All were sorted by just cleaning and bending connections and repairing broken wires.

Just as these problems are sorted, Blue Bess fails again completely on the A3 (her favorite breakdown spot) which thankfully was having roadworks, so we were able to pull into a coned-off area and wait the 1.5 hours for the AA to turn-up. The AA man became convinced it was the electric fuel pump which I had fitted some 18 months earlier, but no amount of jiggling the wires and tapping it with a hammer would restore its functionality, so the car had to be towed home. The next day I very skeptically tested the fuel pump and to my amazement I also found that it certainly did not work. Hence the following day was used to fit a spare pump which I had, but this too was found not to work, even when tested by connecting it directly to the battery. Hence another electric pump was ordered from the internet and was patiently fitted.

This new, more powerful pump, which required air-line fittings and bigger hoses, definitely did work, however it was altogether too powerful and caused fuel to leak profusely from every nook and cranny in the carburettor. At this point, a phone call to a 340 expert suggested that since the distributor and the oil pump were working, the mechanical fuel pump should work too, because it is driven by the same (intermediate) shaft in the engine. Hence, I decide to have another go with a mechanical fuel pump and so one is ordered from the internet and a couple of fresh bits of smaller fuel hose are purchased to allow it to have really perfectly-fitting pipes when tried for the first time. The new fuel pump (the fitting of which was pretty agonising, thanks to its spring-loading) can be seen below.

Now in March 2019, and to my amazement, the mechanical fuel pump was found to work perfectly and keep the engine running happily with no leaks or stalling at all. So now its time to get the MOT sorted and she was duly booked in for this at the local garage. However, she failed on 3 tyres (ouch, but this was easy for them to sort) and nearside welding (double ouch, but not so easy to solve). The garage asked for a repair panel to be purchased and I have since managed to get a panel which is about as close to what they requested as possible, so I am currently waiting for it to arrive so that the garage can begin the work.

As of early April 2019, the panel has arrived and is awaiting the garage to cut out the old metal and weld it in place.

The panel was eventually welded in to place and now needs to be painted properly. Things have been a bit delayed by various other tasks such as fitting new carpets to a Rover P5, my progress with which can be followed here.

Deep Blue was used as main transport while Blue Bess was off-the-road but the latter car had to be pressed into action as everyday transport again when Deep Blue developed a radiator leak. My progress on removing the old radiator and refitting the new is shown below.

As of late July 2019, the new radiator seems to be working well in the Summer heat. However, Blue Bess has developed another fuel supply problem meaning that Deep Blue with her new radiator becomes my everyday transport machine. I think the intense heat has caused a vapour-lock in the fuel system of Blue Bess which will need a bit of flushing through with petrol to cure, I hope.

August 2019 saw the welding work which the garage had done on Blue Bess being given a quick spray of paint. The work was left covered in underseal so I should have cleaned it all off and rubbed-down the surface for painting it properly, but I'm being a bit slack at the moment. Hence, it is given a bit of a smooth over with paint thinners, a bit of Kurust where needed and then a spray-over with the right colour. I think it looks alright because that door is only used by the dog.

More recent work (Sept 2019) has seen Red Ness being given a clean-up and polish with the aim of showing her again in a few weeks.

Time to catch up with the blogging and I can report that Red Ness never made it to the shows I was intending to take her to because she cut-out on the A3 on her way to the MOT and the garage has been in charge of her recovery ever since. Now into Nov 2019 I am getting a bit worried that they are leaving her on a back-burner too much but I am assured that their main mechanic is in hospital with a heart problem so I think patience is needed. Anyhow, they had her carburettor apart in Sept 2019 and fitted new floats, gaskets and filters that I procured from Webcon. I also gave them my collection of renix units and procured one specifically for her from the web which is now in their care.

However, I did take Deep Blue to the V3M show at Beaulieu instead in early Oct 2019 and, following a 6 am start in heavy rain, the sun eventually came out and I got there early in time for a photo-shoot in the car park. Just look at how long those shadows are. 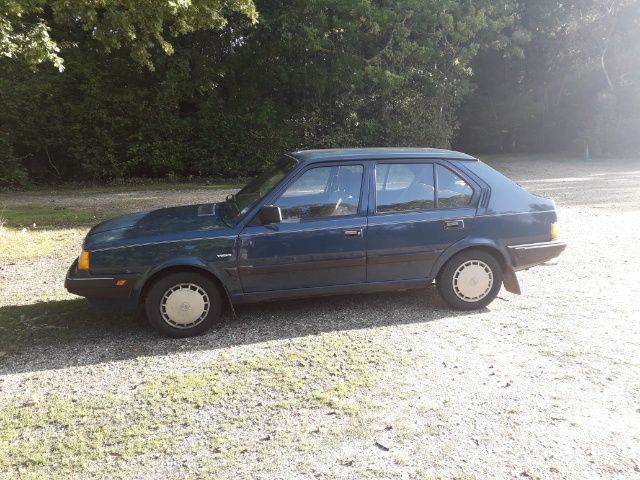 About four 300's made it in the end - most considerably better standard than mine!

Soon it was the turn of Deep Blue to have an MOT and she failed with much work needed to her rear brakes and a new ball-joint on the driver's side. All done by the garage (with Red Ness still on a backburner) and I eventually got Deep Blue back with a nasty knock from the rear driver's side shock absorber. Anyhow, I knew it was on the way-out during the Summer, so its time to remove the old one and fit a new one from the great internet auction house (£5). Who said these things have to be replaced in pairs?

Much work has been done over the last few weeks to try to make the 360 Blue Bess start reliably. The problem is due to air getting into the fuel pipes between the pump and the carburettor, so several of these have been replaced. Fingers crossed, she seems to be starting OK and has been pressed into everyday action while the shock absorber on Deep Blue is replaced.

Somewhat embarrassingly, the suspension noise with the 1.7 continued even with the new shock absorber fitted so another inspection was undertaken and this revealed that the problem was in fact due to the rear jacking point having been bent by the garage so that it scrapped against the rear spring. A bit of bending of the jacking point cured this one.

A problem then developed on the 360 around Nov 2019 which has happened several times before - the ignition suddenly cut out. Hence Blue Bess was put away for a bit of work on the fusebox which was replaced with a better quality second-hand one, after cleaning-up the connection block contact (see burnt one on right of brown connector, half way down).

The problem is always caused by the burnt pin on the back of the fusebox which can be seen on the left below (middle of top row). In contrast the 'new' one is considerably better (below right) and fitting it appears to have solved the problem for the time being.

Being able to put the 360 back into action allowed me to complete an oil-change on Deep Blue.

Dec 2019 and the timing of the service was perfect since no sooner was the 1.7 sorted for another year, the 360 starting problems returned with a vengeance which made me put her back in the garage to finally try to get to the bottom of all this. The carburettor top was removed and it duly showed that one of the brass pipes inside had fallen out and had sunk at the bottom of the float chamber. After some confusion, dismantling a spare 360 carb showed me where this pipe should actually be fitted and it was duly tapped back into the correct hole.

After sorting this, the 360 was pressed back into action again, but my optimism was short-lived because the starting problems continued and the car also had major idling problems. I had to enrich the mixture and increase the tickover just to keep her going at the traffic lights and this caused major running-on problems when the engine was turned off. Hence it was decided to take the 360 off the road again for another look inside the carburettor and a phone call to the Volvo 300 carburettor guru suggested that I should weigh the float to see if it had absorbed petrol, which causes it to sink and behave badly. With a bit of careful trickery (see below) the float was indeed weighed and found to be about 17 grams, which is 10g heavier than it should be, so a new float will be fitted asap.

Meanwhile, a problem quickly beset the 1.7 whose throttle cable broke and a new one had to be procured from the Netherlands. The fitting was eventually a success (after having to drill out one of the screws and re-tap the thread). This has allowed the 1.7 to be put back into regular use while the 360 is having its carburettor issues rectified. 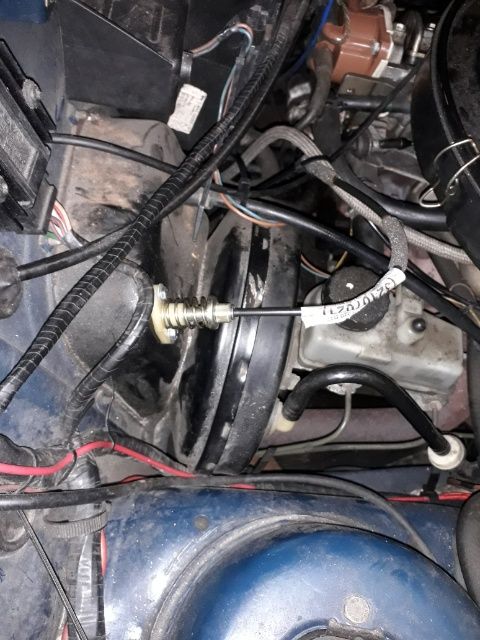